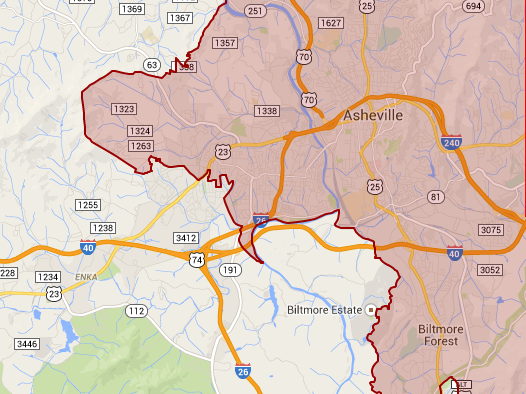 Republican or Democrat, as Americans, we should always seek fair representation of our voters, even for voters that don’t agree with us.  Equal Representation Under the Law.  This is the core of democracy, and it has been tainted.

There are some details that make this specific gerrymandering round especially insidious and harmful.  Most of the research you’ll find about gerrymandering involve districts that snake and meander.  But something more harmful is happening.

I’ll call it Divide and Conquer….

In Asheville, and in other cities  around the state, the voting power of urban communities is divided down the middle or in thirds, and placed alongside rural populations such that rural populations have the majority.

Over the next week I will pull together and edit summary articles illustrating the problem, showing some possible solutions that others have invested hours, and thinking about what can be done.

I won’t be able to demonstrate today – I’m not quite ready!  It’d be great to have some research under my belt first, some great materials printed and ready to hand out, and some resources here to link to and summarize.    I’m no expert, but there are experts out there who have devoted hours to this topic.  Lots to sift through.

Summary Articles and some Research

Here is Karl Rove’s original article outlining the successful Republican strategy:  “He who controls redistricting can control Congress.”  It is featured in a Democratic article highlighting the redistricting issue.

The Washington Post highlighted some of the most gerrymandered districts in the US, 3 of which are in North Carolina.

For those who want some hard core data and historical facts, check out Loyola Law School professor Justin Levitt’s article on redistricting and strategy.

And then northcarolina.homelocator.com has a map that you can zoom in and browse to see congressional district boundaries.  (Summary of observations to go here soon on a separate post.)

And lastly, here is a site that seems to further the cause to End Gerrymandering Now, and proposes the Iowa model for districting.  It looks good!